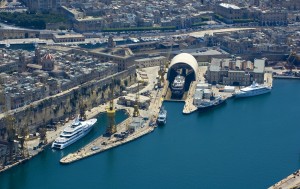 Further confirmation of the nautical industry’s substantial recovery, as already highlighted by NAUTICA ITALIANA, and the key role played by Italian-made products in this trend, is provided by figures in the authoritative Superyacht Report’s 2016
Global Order Book. This analyses the segment of superyachts over 30 metres long and confirms the leadership of Italian shipbuilding, an excellence that is fully represented by the association affiliated to Fondazione Altagamma.
In fact, the Superyacht Report’s Global Order Book reveals that Italy is further consolidating its leadership in the over-30 metre long superyacht sector, with a worldwide percentage of units delivered between 2011 and 2015, equal to 37.2%. This is equivalent to the total of all those delivered in the same period by Holland, Turkey, the United States and the entire Asian continent put together. This leadership is also confirmed by the 2016 trend, which sees Italy’s shipyards working on 177 of these yachts with an average length of 44.2 metres out of a total of 424 yachts being built worldwide.
This is also reflected in terms of Gross Tonnage (GT), where Italian producers have 32% of the worldwide share of global orders in 2016, whilst, as far as order numbers are concerned, the share is 42.7% (a significant increase compared to 38% in 2015).
When overall length is considered, the Italian percentage is 41.7%. These are prestigious statistics, which also confirm Italy’s leadership as regards orders for units of ever increasing size.
These important figures not only confirm the absolute need to provide concrete support in enhancing and effectively promoting the work of those companies representing quintessential Italian excellence in the world, but also once again highlight the importance of the project of NAUTICA ITALIANA, a large proportion of whose members generate the numbers reflected in the Global Order Book.
In particular, as far as shipbuilding is concerned:
• In the 30-45 metre segment, 75 units are being built by Yards included among the members of Nautica Italiana;
• In the over 45 metre segment, 40 units are being built by Yards included among the members of Nautica Italiana;
• Among the 50 yards considered by the Report to be most “vital” at global level, 10 builders of superyachts are members of NAUTICA ITALIANA – Arcadia Yachts, Azimut, Baglietto, Benetti, CRN, Custom Line, Mondomarine, Perini Navi, Pershing and Picchiotti – and 4 of these are ranked in the top 15;
• A member of NAUTICA ITALIANA leads the global ranking in the sailing industry, and another member ranks first for the number of in-house exterior and interior projects in the Yachting world;
• In general, analysing the design area, Italian shipbuilding leads the world with 30.9% of the world’s in-house exterior projects and 44% of in-house interior projects.
A position of leadership has been achieved also thanks to the contribution of the Italian accessories and components sectors, the top brands of which are members of NAUTICA ITALIANA.
Italy is also playing an increasingly important role in the superyacht Refit&Repair sector, which sees the Mediterranean basin as a constantly developing key area, due to this segment’s contribution to the Yachting Industry’s economy. This contribution was driven primarily by routine maintenance, repair in the strictest sense, ever more extensive and major refit work through to the modification of dimensions and restoration of vintage
boats.
Here as well, a member of NAUTICA ITALIANA stands out as one of the top three companies in the world ranking of Refit&Repair yards.
Further information on NAUTICA ITALIANA NAUTICA ITALIANA, the association affiliated with Fondazione Altagamma, was founded in September 2015 by 25 leading Italian nautical manufacturers with the aim to bring together top firms from the entire sector — Industry, Services and Territories —, draw up a strategy for the development and growth of the nautical industry, both in Italy and internationally, and restore the international stature that it deserves.
Open to cooperation with other important industry players, such as Territories and regional Districts, it is selective in its efforts, with a focus on its Charter of Values and shared strategic project.
Nautica Italiana’s positioning and particular focus on international markets are traits it shares with Fondazione Altagamma, which since 1992 has been a common forum for top Italian cultural and creative firms recognised as true ambassadors of Italian style to the world. In fact, the affiliation with Fondazione Altagamma stems from the awareness of the possibility of creating strong synergies with other sectors of excellence and further enhancing the role of the entire nautical industry.
In order to achieve these goals, the association drew up “NAUTICA 365” — a 360° strategic project for 365 days of the year based on three main pillars: the Nautica Italiana Manifesto, with nine concrete legislative proposals to support industry growth; the “Ethical Contract” to ensure professionalism and transparency, and a national and international promotional plan with a new nautical events strategy.
The Board consists of seven members: Lamberto Tacoli (Chairman); Luigi Alberto Amico, Cataldo Aprea, Fabio Boschi, and Giovanna Vitelli (Vice Chairpersons); Corrado Salvemini (Director); and Lorenzo Pollicardo (General Secretary).